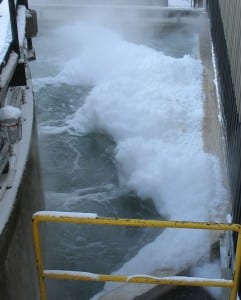 An industrial plant was using a combination of boiler stack gas and expensive carbon dioxide (CO2) to lower the pH of its recycled water, which needed to be neutral prior to use.

The company was adding stack gas at several points in the treatment train using simple coarse bubble diffusers in a clarifier center well and a subsequent pH adjustment tank.

Because the stack gas was unable to achieve the neutral pH in the last reaction tank, the company was also purchasing and injecting CO2 into the clear well near the water supply pumps that fed the manufacturing process.

At times, the purchased CO2 was foaming downstream as the pumps sucked in the CO2 gas and pumped out a supersaturated gas/water mixture.   The foaming water interfered with the production process and caused operation curtailments.

Though the client was ultimately creating the neutral water they needed, they knew there had to be a better, more cost-effective way to accomplish the task.

Mr. McKinnon observed that the individual stack gas diffusers were ineffective in mixing the gas throughout the water column in the reaction tank.  As a result, much of the stack gas escaped undissolved, losing the pH adjustment potential.  In addition, most of the water was never exposed to the stack gas as it passed through the uneven gas distribution in the tank.

Mr. McKinnon proposed that the plant staff build an alternative stack gas diffuser array using commonly available pipes and existing stack gas connection points.  He instructed the staff to arrange the diffusers to create a spiral roll mixing pattern to trap the gas bubbles in the turbulent flow path and mix them through the entire water column.

Following a successful test run of the trial array, the team installed a permanent pipe diffuser.  The permanent array proved to be so successful that the client has not purchased CO2 since its installation – saving the company at least $13,000 annually by neutralizing water pH without reliance on expensive CO2.

In addition, the improved mixing of the stack gas has allowed mill operators to throttle the gas flow, producing the desired pH at lower gas flows.  This has produced the added benefit of better pH control with reduced pH variability, improving overall water quality for the facility.

See the spiral roll mixing pattern in the videos below:

John worked exceptionally well with the operations teams and has transferred much of his knowledge to build their capability and confidence.

His dedication and commitment to this project has been outstanding, and he demonstrates incredible personal flexibility to ensure a successful outcome.

To recognize John’s achievements, he was granted a “Distinguished Performance Award” in July 2013.

Without John in our team, we would not have been successful. Without him, and just relying on our turnkey contractor, we would have failed complying with our environmental permit consent, and we would have been forced to restart another project just to correct vendor errors.

By having John on this project, I did save a huge amount of capital reinvestment and waste of time and efforts.

I worked with John McKinnon for over a year on a particularly challenging capital project and throughout that time John demonstrated an exceptionally positive and focused skill set and attitude.

John’s water and waste water expertise was paramount to identifying and addressing engineering and process issues, working with a problematic joint venture supplier and the ‘hands on’ provision of communication and training for the client’s employees.

There is no doubt that the project benefi… END_OF_DOCUMENT_TOKEN_TO_BE_REPLACED