The wastewater generated by an industrial client was causing problems at the publicly owned treatment works (POTW) where it was being discharged. 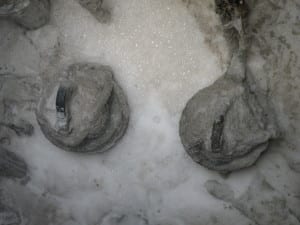 This water’s high concentration of surfactants and other organic chemicals was causing intensive foaming in the pump stations and plugging the air relief valves in the force main.

The client was going to be prohibited from discharging to the POTW unless it could pretreat the water to remove the surfactants, chemical oxygen demand (COD), and suspended solids.

The client determined that dissolved air flotation clarification could remove suspended solids and some COD and surfactants from the water.  The pilot study they performed to define the feasibility of the idea revealed that the process might work, but it would be plagued with housekeeping, reliability, and maintenance issues.  A cost estimate indicated that the process would require a capital expenditure of $3.8 million.

Recognizing the impracticality of the conventional process, Mr. McKinnon researched and identified an alternative process for removing surfactants to decrease discharge costs.  His proposal modified the nature of the wastewater so that it was acceptable to discharge the pretreated effluent to the client’s own wastewater treatment plant and no longer rely on the POTW.  This alternative process used a proprietary adsorbent/polymer product to adsorb the surfactants and remove their foaming tendency.  The client could then remove the solids in their primary clarifier and dewater them with its other wastewater sludge.  They would no longer need to discharge into the POTW at all.

Following a trial that verified the effectiveness of Mr. McKinnon’s proposal, the client constructed the new system and disconnected from the POTW.

The alternative process cost $1.5 million – a capital savings of $2.3 million as compared to the initial plan.

John worked exceptionally well with the operations teams and has transferred much of his knowledge to build their capability and confidence.

His dedication and commitment to this project has been outstanding, and he demonstrates incredible personal flexibility to ensure a successful outcome.

To recognize John’s achievements, he was granted a “Distinguished Performance Award” in July 2013.

I worked with John McKinnon for over a year on a particularly challenging capital project and throughout that time John demonstrated an exceptionally positive and focused skill set and attitude.

John’s water and waste water expertise was paramount to identifying and addressing engineering and process issues, working with a problematic joint venture supplier and the ‘hands on’ provision of communication and training for the client’s employees.

There is no doubt that the project benefi… END_OF_DOCUMENT_TOKEN_TO_BE_REPLACED

Without John in our team, we would not have been successful. Without him, and just relying on our turnkey contractor, we would have failed complying with our environmental permit consent, and we would have been forced to restart another project just to correct vendor errors.

By having John on this project, I did save a huge amount of capital reinvestment and waste of time and efforts.